I have been collating information Ethnicity and Educational attainment for several years concentrating primarily on the proportions of different ethnic groups attaining 5 or more GCSE A*-C grades  originally in  in any GCE subjects but more recently using the proportions of students gaining 5 or more GCSE A*-C grades including English and Mathematics . However from  2016 onwards student attainment and progress has been assessed in terms of new measures [i.e Attainment 8 and Progress 8] and in terms of the proportions of students attaining grades A*-C and 9-4 as appropriate in so-called EBacc subjects. I have therefore changed the Presentation of the Data in this document quite considerably to concentrate mainly on the most recent data although I  have retained some sources of data on pre-2016 ethic patters of achievement. It may be best for students to concentrate on analysis of the most recent data although some familiarity with longer term trends is also useful

A   new secondary school accountability system was introduced in 2016 and you may use the following link to find the latest ]2018/2019] information on Ethnicity , Free School Meal Eligibility and gender and attainment at GCSE level

Click here for DFE data relating to 2018/19 GCSE results Some data on ethnicity, free school meal eligibility and  gender can be found on pp7-12  in the main text document  but for more detailed information click on the third link [ Characteristics National Tables]  and then to find Tables CH1 and CH2   which are especially useful  February 2020

You may  click here  for DFE statistics relating to 2015/16 GCSE results which are  based on this new system. For data on ethnicity, free school meal eligibility and gender scroll down to pp16-25 of the statistical first release. Click here for further information in the accompanying Characteristics National Tables.

Also click here for DFE statistics relating to 2016/17 GCSE results  For data on ethnicity, free school meal eligibility and gender scroll down to pp22-34  of the statistical first release. Further information can be found in the accompanying Characteristics National Tables where Table 2a is especially useful. Also  for a brief exercise based upon the latest GCSE data ****** January-February  2018

Also click here for DFE data relating to 2017/18 GCSE results Some data on ethnicity, free school meal eligibility and  gender can be found on pp22-31  in the main text document  but for more detailed information click on the third link [Key Stage 4 and Multi-academy trust performance Characteristics National Tables]  and then to find Table 2a  which is especially useful  January 24th 2019

Click here for DFE data relating to 2018/19 GCSE results Some data on ethnicity, free school meal eligibility and  gender can be found on pp7-12  in the main text document  but for more detailed information click on the third link [ Characteristics National Tables]  and then to find Tables CH1 and CH2   which are especially useful  February 2020

The following table has been copied from Table CH2  using the Percentage achieving the English Baccalaureate as the basis of compariosn. However students  may prefer to use the above link to Table CH2 where you may find detailed data  on differences in educational attainment by Ethnicity, Free School Meal and Gender using EBacc performance, Attainment 8 and Progress 8 criteria and attainment in English and Methematics.

Please note that  the attainment levels of Gypsy Roma and Irish Heritage students are shown to be particularly low. The difficulties which these children face in pursuing their education have been discussed at a recent Select Committee meeting which is reported here by the BBC . Video coverage of the full Select Committee meeting   can be accessed here 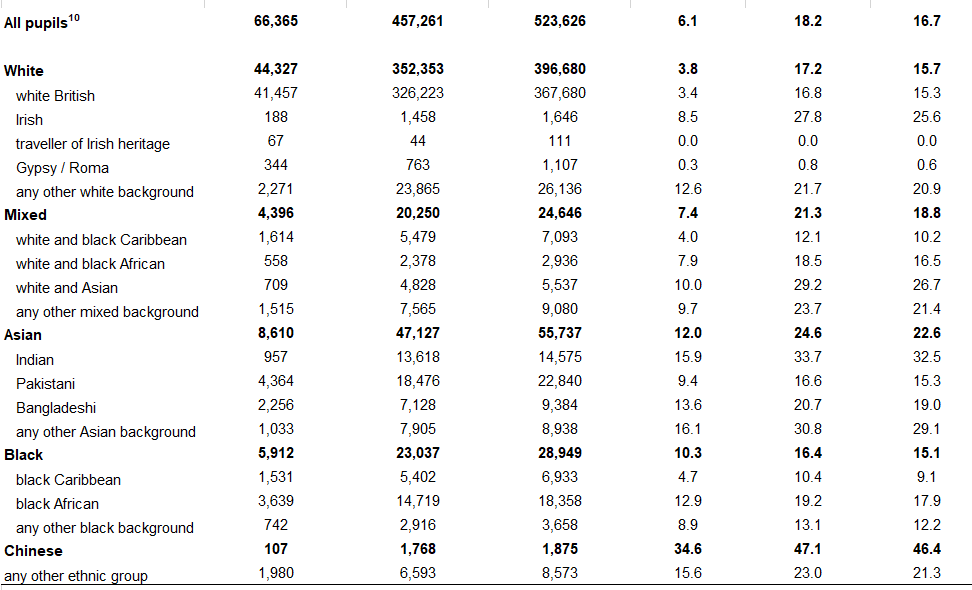 1. Includes entries and achievements by these pupils in previous academic years.
2. State-funded schools include academies, free schools, city technology colleges, further education colleges with provision for 14- to 16-year-olds and state-funded special schools. They exclude independent schools, independent special schools, non-maintained special schools, hospital schools and alternative provision (including pupil referral units, AP free schools and AP academies as well as state-funded AP placements in other institutions).
3. Pupils at the end of key stage 4 who are included in the measure.
4. Attainment 8 and Progress 8 are part of the new secondary accountability system that was implemented for all schools from 2016. Users should be cautious when comparing Attainment 8 scores between 2017 and 2016. In 2017, Attainment 8 scores were calculated using slightly different point score scales in comparison to 2016, in order to minimise change following the introduction of 9-1 reformed GCSEs. This means that Attainment 8 scores are likely to look different in 2017, as a result of changes to the methodology. More information on the calculation of these measures is available in the Progress 8 guidance:
https://www.gov.uk/government/publications/progress-8-school-performance-measure

Sociologists have suggested three main types of explanation for the above relationships between ethnicity, free school meal eligibility and educational achievement.

The gaps in attainment for white pupils eligible and ineligible for free school meals are greater than for any other ethnic group and this has generated considerable concern as to the prospects of white working class students although free school meal eligibility is a less than perfect measure of social class membership. This topic will be considered in more detail presently.

Ethnicity and A Level Achievement

Click here for Widening Participation in Higher Education 2019   and then on Main Tables: and then on Table 8 . Data are available on Access To HE and Access to High Tariff Universities. Notice these data at the above  link refer to Access To HE from State Schools. It is important to note that large proportions of students gain access to High Tariff Universities via private schools which may well mean that the overall percentages of white students at these universities are greater that the data based only on  [state funded and special schools] suggest.

Also  if you use the above click here link there are particularly nice graphics on pages 12  and 13  which illustrate the points shown in the following table.

Also in the Ethnicity and Access to Higher Education  section .change the last 2 sentences to the following

Relationships between ethnicity, gender, free school meal eligibility and access to Higher Education are illustrated in the following table. You may discuss these data with your teachers

Some indication of the longer run trends can be found using the following sources.

The patterns of achievement illustrated in the 2017 examination data are similar to those which have been observed for many years although students should discuss with their teachers some of the pattern changes which have occurred in the last 30-40 years.

The following information is extracted   from the Youth Cohort Study of 16 Year olds published in Feb 2005 and amended in June 2006. It illustrates trends in educational achievement at GCSE level [as measured by attainment of 5 or more GCSE grades A*-C in Year 11] between 1989 and 2004 according to the  ethnicity of the students estimated on the basis of   samples which range between  24922 and 13,698.

The above   data indicate that the attainments of all ethnic groups listed have improved since between 1989 and 2004 but that significant ethnic inequalities in educational achievement remain.

students may  click here for a detailed paper by Professor Steve Strand {Ethnicity, deprivation and educational achievement at age 16 in England ;trends over time .}. In this paper Professor Strand provides a clear comprehensive graphical description of relevant trends as well as detailed analysis. The charts and tables on pp40-50 provide the best description that I have seen of trends relating ethnicity, free school meal eligibility, gender and educational attainment at GCSE Level.

4 You may click here for the House of Commons Education Committee Report: Underachievement in Education by White Working Class Children [June 2014]. Chapter Two of this report contains detailed data on trends in the attainment levels of disadvantaged pupils in different ethnic groups between 2006/7 and 2012/13 although the main focus of the report is , of course on White working class pupils.

5  Although members of ethnic minorities are found throughout the UK class structure, Afro-Caribbean, Pakistani and Bangladeshi origin students are especially likely to be found in the lower sections of the working class and to experience poverty. Social theorists analysing poverty distinguish between absolute and relative concepts of  of poverty and on the basis of the most widely used official definition  relative poverty is said to occur when individuals receive incomes lower than 60% of the median income . However  it is noted also that there are significant differences in the extent of relative poverty depending upon whether it is measured before or after housing costs

Recent on ethnicity and income distribution can be found in the annual DWP publications entitled Households Below Average Income and the following data has been taken from the most recent version published in March 2019 . The columns in the following tables refer to proportions of different ethnic groups in quintiles of the UK income distribution from the lowest to the highest quintile before and after housing costs. 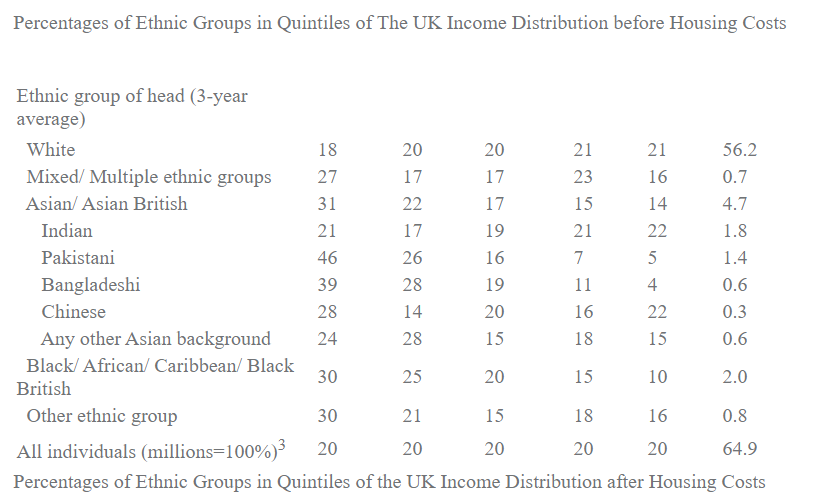 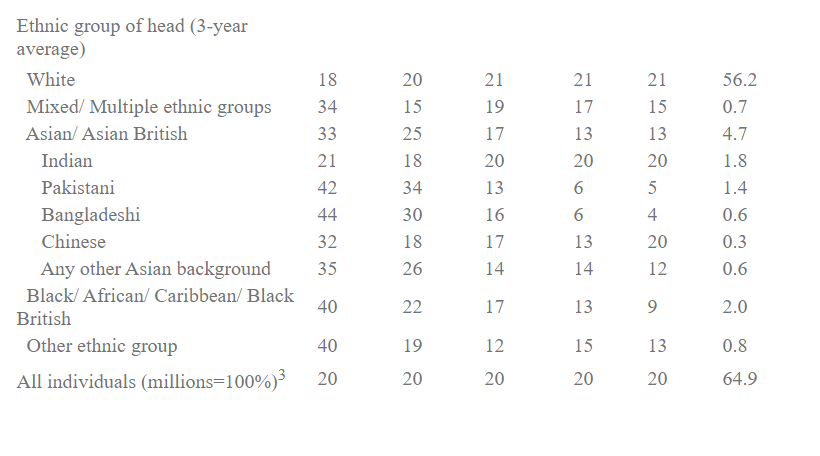 6 DFE Data for the 2015 GCSE Examinations

You may  Click here for DfE publication; Revised GCSE and equivalent results in England 2014-15 [DFE].     It is very important to note that in this SFR publication rather less data are provided on attainments of pupils eligible for free school meals because a wider measure of social disadvantage is introduced in this publication. although full Free school meals data are provided in the supplementary tables and I have used these data later in this document [Again once you reach the DFE  page you may find it best to click on the SFR [Statistical First Release]  PDF link  which provides  information educational attainments at GCSE level relating to Gender, Ethnicity, Free School Meal Eligibility and whether or not English is the pupils' first language. More detailed information may be found by clicking on National and Local Authority Data and finding Tables 1 and 2]  .

In the late C20th the educational attainment levels of Black and Minority Ethnic pupils [ other than those of Chinese and Indian origin] were considerably lower than those of  White British pupils and sociologists advanced a variety of theories [to be discussed later in the document] as to why this might be the case. However more recent statistics on GCSE attainment indicate that patterns of ethnic educational attainment at GCSE Level have changed significantly.

However it is recognised that in the Report that reliance on Free School meal eligibility as an indication of social class membership does present some problems.

Sociologists have long recognised the existence of significant social class inequalities in educational attainment and have sought to explain these inequalities  in terms of some combination of partly genetically inherited social class differences in intelligence, working class material and cultural disadvantages and organisational factors in the schools themselves involving streaming , banding and setting which might result in positive and negative labelling processes. It should be noted that many sociologists are critical of theories based upon social class differences in inherited intelligence and on theories focussing on the alleged cultural deprivation of working class parents and their children while often preferring to emphasise that working class parents and children may not be lacking in aspiration but that they may lack the cultural, social and economic capital necessary  to translate their positive aspirations into successful strategies to improve educational attainment.

All of these arguments are discussed in the Select Committee Report  in attempts to explain the relative underachievement of white working class pupils relative to working class ethnic minority students. The Report suggests , however that more research will be necessary to resolve these difficult issues and this has led the DFE to sponsor further research leading to the publication of two significant reports in 2015 the publication

In the latter Report the authors summarise  some of the available research studies which aim to assess the relative importance of school factors, and parental and student attitudes as determinants  of the trends in ethnicity, free school meal eligibility and student attainments.

My own conclusions  , such as they are, are as follows.