In Units 4 and 5 we have seen that sociologists have analysed the causes of social class differences in educational achievement in terms of theories emphasising cultural deprivation, cultural difference and material disadvantage. It has been noted whereas early  theories based upon the concept of cultural deprivation have attracted considerable criticism sociologists nowadays are more in sympathy with theories based around cultural difference linked to social class differences in cultural capital and social capital  and theories emphasising the material and economic disadvantages experienced by considerable numbers of working class families and their children.

The following four studies provide more recent information around the issues considered in these notes. In relation to these studies teachers will know that Professor Feinstein’s work is now widely reported in several AS Sociology textbooks so that it is clearly directly relevant to examination preparation. However studies 2, 3 and 4 might perhaps best be used more as optional extension work designed to illustrate the ongoing importance of social class inequalities in educational achievement.

Professor Feinstein’s research demonstrates suggests that  even before children begin Nursery School the intellectual development of working class children appears to be slower than that of their middle class peers and that this is the case irrespective of the initial levels of the children’s measured intelligence. His research findings indicate that children’s educational progress between 22 and 42 months is related both to their test scores at 22 months and to their parents’ socio-economic status [SES: i.e. their social class position.] In particular his data indicate that children with high test initial scores but low parental SES are overtaken by 42 months by children with low test scores but high parental SES, thus demonstrating that parental SES has a significant impact on pupil progress. He demonstrates further that pupil educational levels at 22 and 42 months are good predictors of pupil’s educational achievement at age 16.

Professor Feinstein concludes that further investigation of the effects of differing parenting techniques is necessary given the extent to which educational development varies so significantly even before children enter nursery school but also that wider investigations of patterns of social disadvantage are necessary to assess the reasons why patterns of achievement at ages 22 and 42 months are such good predictors of educational achievement in later life. 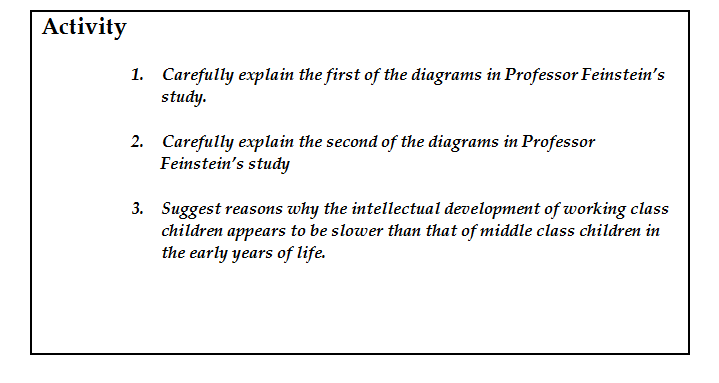 For University.s not for me: I'm a Nike Person [Article By Louise Archer and Colleagues 2007]   Click here  November 2021

There are disputes within Sociology as to the relative importance of cultural and material factors as determinants of educational attainment but there is nevertheless substantial agreement that the combined effects of these "external factors" are very significant. Thus for example in a 2007 study  Robert Cassen and Geeta Kingdon  argued that although schools do make a difference "while students' social and economic circumstances are the most important factors explaining their educational results about 14% of the incidence of low results is attributable to low school quality"  and "disadvantaged kids are more likely to attend poorly performing  and can miss out on best teaching due to the 5 A*-C target." [However this target has recently been replaced by the Progress 8 target]

Also Professor Stephen Ball in his study The Education Debate [3rd edition 2017] stated that there is  good evidence that the variance in student attainment can be explained primarily by factors external to the schools and that although it is clearly important to investigate how changes in school organisation and teaching practices can improve the prospects of disadvantaged students it may be that "educational inequality might be better tackled not inside schools or families but by addressing poverty and inequalities in health housing and employment."

This view is reiterated in the recent study by Lee Elliot Major and Stephen Machin entitled Social Mobility and Its Enemies [2018]. Here the authors argue that while it is obviously true that all schools provide some education for all of their students  and that some particularly effective schools compensate to a considerable extent  for the adverse effects of some students' social background, "The truth is that schools can only do so much. They are governed by the 80/20 rule; on  average 80% of the variation in children's school results is due to individual and family  characteristics, while the remaining20% is due to what happens in school. Some schools are producing better results with very similar intakes of children. But the idea that teachers on their own  can cancel out extreme inequalities outside the school is fanciful."

Nevertheless it must also be recognised that researchers are trying very hard to investigate the causes of differences in school effectiveness  and that if a way can be found to spread best teaching practices to all schools this could significantly increase equality of educational opportunity. I have included the 4th and 5th links below to give a flavour of  the School Effectiveness approach  but Advanced Level Sociology students obviously need not familiarise themselves with the details of this research for examination purposes.

The Interaction of External and Internal Factors

Also click here for a very useful podcast from Kate Flatley on interaction of external and internal factors.