It has been argued at least since the 1950s that social class differences in educational achievement might be explained at least partly by social class differences in cultural characteristics. However we must appreciate also that sociologists have approached the analysis of cultural characteristics in different ways so that whereas theories of the 1960s were often based upon the idea of working class cultural deprivation or indeed cultural pathology, later studies such as those undertaken by sociologists such as B. Bernstein, P. Willis, P. Brown, P. Bourdieu, and S. Ball imply that working class students may be put at an educational disadvantage not because their culture is “deprived” or “pathological” but because it is “different”.

Furthermore Professor L. Feinstein has presented recent statistical evidence that social class differences in home environment at an early age  do place many working class children at a long -term educational disadvantage  while equally important work from the Institute of Education indicates that although pupils’ social class position has important effects on early learning, the quality of pupils’ home learning environment, [their so-called HLE], which varies both within individual social classes and between different social classes] has an even more important effect on early learning than does pupils’ social class position.

It is important, for theoretical reason, to distinguish between these different sociological approaches to the analysis of cultural characteristics because while earlier theories based upon the concept of cultural deprivation have attracted significant criticism, later theories based upon different analyses of cultural differences have much to contribute to the explanation of social class differences in educational achievement. I hope, therefore, that you will forgive me if I spend time on some rather dated sociological work before turning to the consideration of more recent studies.

Let us first consider the analysis of social class differences in cultural characteristics as possible determinants of social class differences in educational achievement as outlined in the studies of H. Hyman [1967], B Sugarman [1970] and JWB Douglas [1964] all of whom claim in various ways that   working class and middle class people are likely to operate with different overall value systems which in turn give rise to significantly different attitudes to education. These theories are usually taken to imply that many working class pupils are the victims of cultural deprivation although none of the above authors actually use this term.

The main elements of Hyman’s theory may be listed as follows.

Hyman’ explanation was extended by B.Sugarman[1970] who argued that insofar as  social class differences in value systems do exist they can be explained as deriving from the different occupational experiences of the different social classes. The main elements of Sugarman’s theory may be listed as follows.

JWB Douglas’work which had been completed a few years earlier had provided considerable empirical support for the theories of Hyman and Sugarman. Once again the main elements of Douglas’ study may be listed as follows

Another variant of the subcultural approach was the sociolinguistic theory of Basil Bernstein in which he distinguishes between the middle class elaborated code and the working class restricted code. According to Bernstein, the elaborated code used by the middle class permits easier expression of abstract arguments which is very important for educational success whereas  the restricted code is less effective in this respect. It should be noted that although Bernstein has sometimes been accused of support the concept of cultural deprivation he always strenuously denied that this was the case and emphasised that he wished to show that there were social class differences in linguistic codes not that the restrictive code of working class children suggested that they were linguistically or culturally deprived. However critics of Bernstein such as H. Rosen argue that Bernstein‘s class analysis is oversimplified while W.Labov argues that it is perfectly possible to deal with abstract ideas using the restricted code.

Criticism of the Theories based upon the Concept of Cultural Deprivation

At the time of their publication the theories of Hyman, Sugarman and Douglas were widely believed to offer useful sociological explanations of social class differences in educational achievement but increasingly these theories were criticised on specific methodological grounds and because their authors seemed to have accepted too readily that the relative failure of many working class children could be explained in terms of their cultural deprivation. We may list the criticisms of these theories as follows.

It is nevertheless argued by some theorists, most notably the American political scientist Charles Murray, that especially within the poorer sections of the working class, some parents and children are unambitious and fatalistic and that such characteristics do help to explain the relatively low educational achievement of some poorer children and the inter-generational transmission of poverty among some families and the creation of an underclass locked into dependency upon the welfare state. Yet other sociologists have been scathingly critical of Murray’s theories citing survey evidence that most poor adults would be keen to make career progress if opportunities were available and noting that fatalism and lack of ambition should be seen as a response to ongoing economic disadvantage which itself is seen as the fundamental cause of poor people’ difficulties.

As a result of the above arguments most sociologists would argue nowadays recognise that overall working class culture cannot usefully be described in terms of cultural deprivation and that when elements of working class cultural deprivation do seem to exist they should be seen as responses to the situation of economic deprivation not as evidence of working class cultural traits which are set in stone. For example, P.Langley, A. Pilkington and J.Richardson [2005] provide the following strong critique of Cultural Deprivation theory: “Cultural deprivation theory has been strongly criticised. There is evidence that if class differences in culture exist, then they are slight and of little significance. Much so-called culturally deprived behaviour may be due to lack of money rather than lack of norms and values needed for high attainment. For example, working class students may leave school earlier because of low income rather than lack of motivation and parental encouragement.”

In any case data from the 2008 Youth Cohort Study shows clearly that although there are still social class differences in pupils attitudes to further education the vast majority of pupils from disadvantaged social backgrounds are do wish to continue their education beyond the age of 16 and that they are usually supported in this aim by their parents all of which suggests that the social class differences in attitudes to education suggested in some earlier studies are nowadays far less applicable.

Young persons’ and parental attitudes to staying in full-time education post 16.  [Survey data for Longitudinal Study of Young People in England collected when the young people were in Year 10 and 6 months into their GCSE courses.] 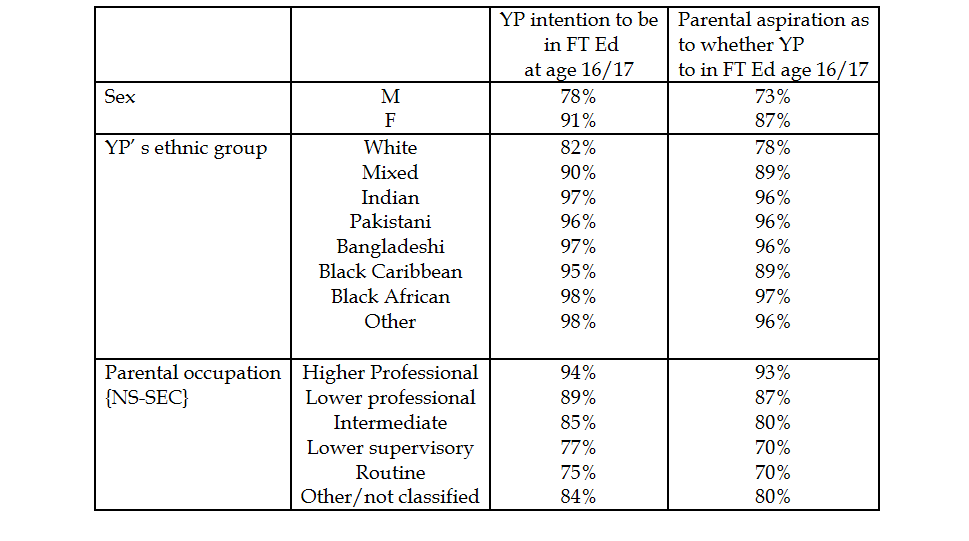 This Activity is based on the above quotation from Langley, Pilkington and Richardson [2005] and the YCS Table.

Comment upon the YCS data on relationships between Young person’s social class, parental social class and attitudes to full time education beyond the age of 16.1.      Have these authors underestimated the usefulness of cultural deprivation theory or not?  Give three reasons for your answer.