Click here for Genetics and Education: The Moral Maze   April 2014

The Life Scientific: Robert Plomin on The Genetics of Intelligence

Click here   for a Guardian article on Grammar Schools,IQ and Genetics. Note among other things reference to the complexity of the statistical methods involved in this debate.  March 2018

Click herefor an article from The Conversation on Genetics and Educational Achievement.  September 2018

Click here  for a recent Daily Telegraph item on research emphasising the importance of environmental influences on intelligence.

The Principles of IQ Theory

Supporters of IQ theory such as psychologists Arthur Jensen and Hans Eysenck make four important claims which together form the basis of IQ theory.

[It should be noted also that IQ theorists have sometimes used similar arguments to claim that  differences in ethnic educational achievements can be explained mainly in terms of ethnic differences in inherited intelligence and that such claims have ignited massive controversy in which these IQ theorists have been accused of ,at best, poor science and, at worst racism. These issues will be considered in some detail in subsequent documents.]

Sociologists recognize that, given the current state of scientific knowledge, it is impossible to determine the relative importance of heredity and the social environment as factors affecting individual intelligence but they are often prepared to argue that IQ theories are flawed in several respects with the result that they overstate the importance of inherited intelligence as a factor explaining social class differences in educational achievement.

Among the criticisms made of IQ theories by sociologists are the following. 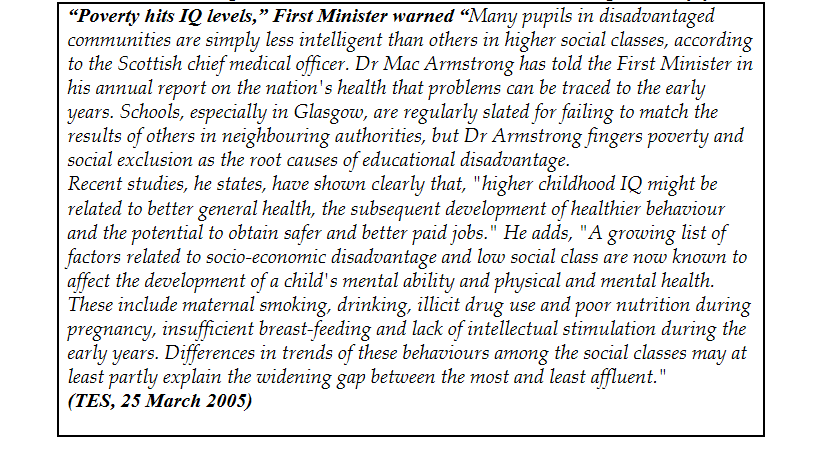 They note also that even if we accept, for the sake of argument that intelligence can be defined precisely and measured accurately via IQ tests, it can be shown that even among children of equal measured intelligence, upper and middle class children are more likely than working class children to achieve educational success. Thus, for example, in his study entitled “The Home and the School”[1964], JWB Douglas demonstrated that middle class children of “average” intelligence were far more likely than working class children of “average” intelligence to pass the 11+ examination which clearly suggests that performance in the 11+ examination was affected by social, environmental factors.On the basis of these arguments sociologists have concluded that IQ tests cannot provide an accurate measure of intelligence and that it is impossible to determine the relative importance of genetic and environmental factors as determinants of intelligence.

Such criticisms have encouraged sociologists to question conclusions of genetically based IQ theories and to develop their own theories which emphasise the importance of the social factors which might help to explain social class differences in educational achievement. It is to these theories which we now turn.