The UK General Election of May 6th, 2010 Sections List:

The Result of the UK General Election of 2010

The Mass Media and Voting Behaviour [External links only at present]

The Influence of Salient Issues and Party Policies

Section 4: The General Election of 2010: Analysis

Click here for the BBC on Parties and Issues

On the basis of the Ipsos Mori  "Political Triangle"  in which respondents are asked to allocate marks out of 10 for political issues, political leadership and political parties as influences on their General Election voting decision political leadership and political issues were seen as of equal importance as influences on voting decisions and both were seen as more significant than political parties themselves. Click here  IPSOS MORI Slide Presentation on the 2010 General Election and scroll to slide 11.

From the 1970s it has been argued by proponents of issue voting models of voting behaviour that for increasing numbers of voters the key determinants of voting behaviour are the party policies on issues that the voters consider to be most salient and in Issue Voting Models it has been argued that General Elections were likely to be won by the Party which had the preferred policies on the most salient political issues. It is , however, important to remember that survey respondents may state preferences for a the policies of a particular party on a particular issue because of a prior allegiance to [or identification with] that particular party rather than because they genuinely favour that party's policies all of which means that the impact of issues and policies on voting behaviour does remain uncertain.

Major opinion poll research companies collect data on issue salience and on political parties' ratings on individual issues  and there are very important similarities between the findings of different surveys of different companies which enable analysts to draw some important general conclusions about voting trends. However there are also some important variations in survey results deriving from the statistical point that random samples of about 1000 are subject to a margin of error of plus or minus three percent, from slight differences in some of the questions asked, in different polls, from differences of timing of different polls and from other technical details relating to different polls Disregarding for the time being the variations in survey finding we may draw the following general conclusions in relation to issue salience and political parties ratings on particular issues.

For purposes of Advanced Level Examinations students should emphasise the above seven points but I include further information below on some of the technicalities  involved in the collection of these data along with additional more detailed information on Issue Saliency and respondents' preferred party on key issues. Different polling organisations use different samples and may phrase their questions about issue saliency differently and all poll findings in any case are subject to a small margin of error.

Consequently although there are substantial agreements in the poll findings of different polling organisations there are also some variations in the relative saliency of different issues and in the parties' ratings on particular issues. However Advanced Level students  should take advice from their teachers as to the depth of knowledge of these matters which is actually required for Advanced Level examination purposes

Issues and Policies : Some Technicalities

The Influence of Salient issues and Party Policies

Issue Saliency and Party Political Ratings 2010 [with some comparisons with 2001 and 2005] [I have made a few minor clarifications to the column headings in this table  on February 6th 2012. Also this table may originally not have worked in some browsers. Hopefully it does now! 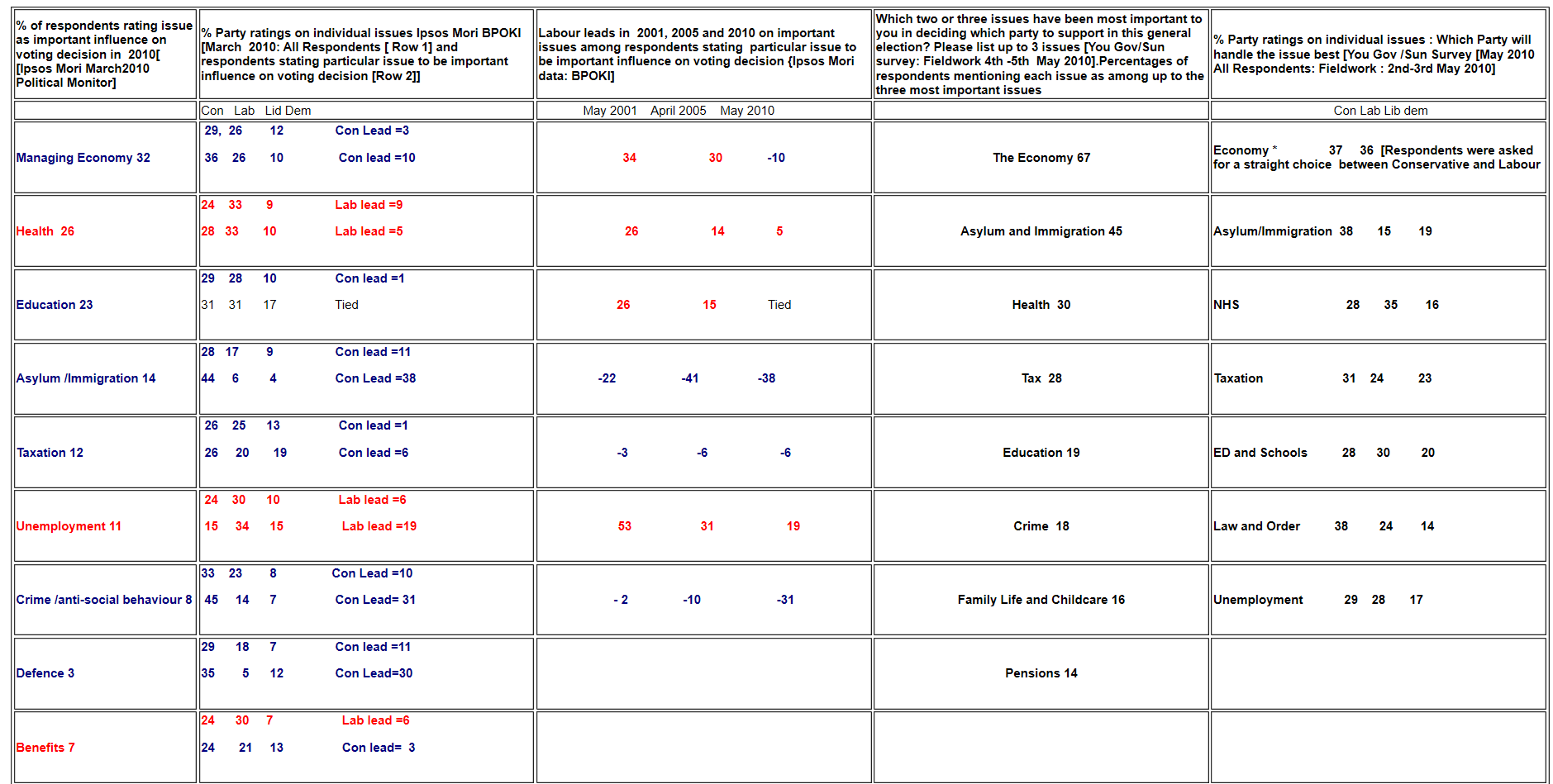 In relation to this table we may note the following points.

The Economy and the General Election

The  economy  was considered to be the most salient issue of the campaign which is hardly surprising given the onset of the Credit Crunch, the depth of the economic recession from 2008 to 2009 , the possibly precarious economic recovery in 2010, the parlous state of the public finances and the likelihood of  public expenditure reductions and tax increases once the General Election was over.  George Osborne had promised in 2007 that, if elected the Conservatives would match Labour's Public Expenditure plans up to 2010-2011  but with the onset of the credit crunch and the economic recession the Conservatives developed a much more critical analysis of Labour's economic policies.

Of course Labour rejected these arguments

During the General Election Campaign the Conservatives focused upon the need for immediate reductions of government expenditure of £6B over and above those proposed by the Labour Party while both Labour and the Liberal Democrats argued that these additional public expenditure reductions  were likely to undermine the current potentially fragile economic recovery [although once in coalition the Liberal Democrats  acquiesced in the Conservative programme of public expenditure cuts on the grounds that Greek economic problems pointed  to the possibility of a growing crisis of confidence in the British economy leading to increased interests rates if the international bond markets lost confidence in the viability of the incoming Coalition Government's debt reduction programme.]

Some of the disagreements among professional economists around these issues of economic policy are outlined in an Observer article published about one month after the General Election.

Click here for a page of links on analysis of state of UK economy .

Party Images and the 2010 General Election

Ipsos Mori publish very detailed trends upon a range of topics relating to the public images of the political parties. I have extracted and rearranged the information in the following table from data collected from the IPSOS MORI site.

Although Labour's image as measured by several criteria deteriorated between 1997 and2001 and between 2001 and 2005 Labour's image was nevertheless still more favourable than the Conservatives' image by 2005. However note that on several criteria the image ratings of the Labour and Conservative Parties narrowed very substantially. Note also that on some important criteria , especially criterion 1 , all parties gained consistently poor ratings .

Percentages of the Electorate believing that the Labour, Conservative and Liberal Democrat Parties are...... 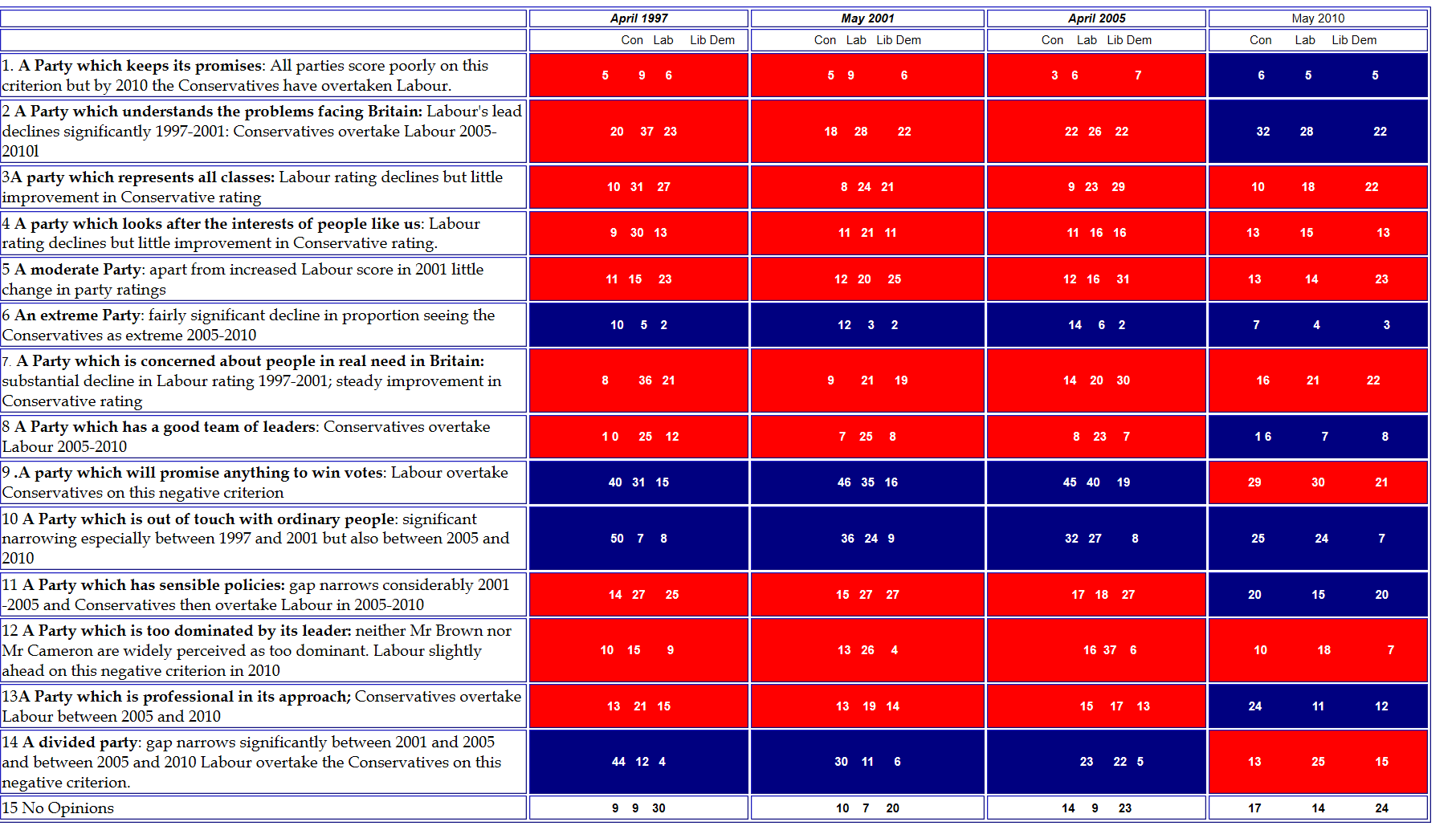 In general terms between 1997 and 2010 Conservative party ratings have tended to improve and Labour's have tended to deteriorate on the basis of the criteria Used by Ipsos Mori. Between 2005 and 2010 Conservative ratings improved especially according to the following criteria: : they are now seen as more likely than Labour to understand the problems ; as having a better team of leaders than Labour; as having more sensible policies than Labour; and as more professional in their approach than Labour. The Conservatives in 2010 were also less likely than in 2005 to be seen as divided; less extreme ; less out of touch with ordinary people and less likely to promise anything to get elected. However it is important to note that even though the Conservative Party image has improved according to a range of criteria   its ratings remain lower  on several criteria than were those of the Blair Governments especially in 1997 and 2001.

Gordon Brown did experience a short honeymoon in the early stages of his Premiership when both the Labour Party and Mr. Brown personally achieved higher opinion poll ratings than the Conservative Party and Mr. Cameron personally. However following the postponement of an expected General Election the poll ratings of Mr Brown and of the Labour Party declined, recovered slightly in the early stages of the "credit crunch" but then declined mainly as a result of the combined effects of the economic recession, the MPs expenses scandal and the perceived relatively poor performance of Gordon Brown as Prime Minister. However Gordon Brown's ratings did improve slightly in 2010.

For several years there have been obvious signs of increasing dissatisfaction with and disengagement from the institutions of the UK political system as indicated by the growth of partisan dealignment, the decline in party membership, the low levels of electoral turnout and the low levels of trust in politicians reported in opinion polls. Voters have been alienated by what they perceived as the "sleaze " of previous Conservative Governments[1979-1997] and the "spin" and alleged financial malpractice in the era of Labour governments [1997-2010] . It has been suggested that the origins of the 2009 MPs' Expenses Scandal lay in decisions of successive governments since the early 1980s not to fund [for fear of antagonising public opinion] the substantial increases in MPs' pay recommended by independent inquiries  but instead to acquiesce quietly in an increasingly generous and loosely regulated MPs' expenses which was to compensate "subtly" for the limited increases in MPs' salaries.

Increasingly , however, the MPs' Expenses system itself attracted criticism which MPs sought to deflect but in 2008 the  High Court  ruled in 2008 that Parliament had no legal right to disregard demands for full disclosure of MPS expenses and when Harriet Harman's efforts to prevent full disclosure failed and evidence of MPs questionable expenses claims [ such as those of Home Secretary Jacqui Smith] began to leak out it was agreed that the  office of Registrar of Members Interests would copy all relevant MPS. expenses data onto disc with a view to eventual publication. However it came as no real surprise when a government official leaked this information to a national newspaper , the Daily Telegraph, reportedly in exchange for payment of £150,000, and the Daily Telegraph began daily publication of MPs and Ministers' expenses claims on May 8th 2009.

Many Peers and MPs were shown to have behaved entirely honestly and reasonably in relation to their expenses claims and only four MPs [all Labour] and two Conservative Peers were actually found guilty of illegal behaviour and imprisoned. However a substantial number of MPs and Peers Expenses claims involved questionable interpretation of the rules governing expenses claims while the rules themselves soon came to be regarded widely as inappropriate. Attention focussed especially on  the questionable designation of second homes, the "flipping " of homes for financial gain and claims for  expenses not remotely connected with MPs' and Peers' political duties:  gardening expenses, house repair, expensive furniture, duck houses and moat cleaning involved claims of hundreds and in some cases thousands of pounds while in other cases there were claims for "adult" CDs, newspapers, toilet seats and even Remembrance Day wreaths which, although not financially comparable to the huge salaries  and bonuses currently being earned in the financial sector ,were seen by many as pointing to the penny- pinching small mindedness of some Honourable Members.

Opinion Poll data suggested initially that the MPs' Expenses Scandal had intensified already existing high levels of dissatisfaction with the political system and it was also widely believed that the  scandal was especially likely to harm Labour partly because Labour was after all the governing party and partly also because David Cameron's handling of the crisis was widely seen as more effective than Gordon Brown's. Brown's ill-judged  and poorly executed response in a You Tube video attracted widespread derision  which was if anything intensified  by dismissive references to it by Hazel Blears [who was herself attracting considerable criticism as a result of her own dubious interpretation of the rules surrounding the designation of here second home which obliged her to repay several thousand pounds of claimed expenses. Brandishing a cheque for several thousand pounds while many were now increasingly suffering the effects of recession did little to enhance her or Labour's popularity.]

However it has also been argued that the Expenses Scandal may also have harmed the Conservatives who were to some extent deflected temporarily from reinforcing the issue agenda which they hoped would ultimately win  the General Election. In the event although the scandal certainly contributed to the reduced electoral support for all three main political parties and to the increased support for minor parties , especially for UKIP, in the 2009 European Parliament Elections it is likely that its impact on the General Election result was much weaker.