Economic Equality/Inequality and Poverty in the Post Thatcherite Era. Post-Thatcherism and One Nation Conservatism 1990-2017

Economic Equality/Inequality and Poverty and The Conservative-Liberal Democrat Coalition

David Cameron and the Conservative Government 2015-16

The individual components of Thatcherite Conservatism are listed below. Thatcherite Conservatives UK have accepted liberal-based beliefs in laissez faire and the market mechanism as well as a strong belief in the inevitability and desirability of economic inequality of outcome  and the sanctity of private property.  This set of beliefs combined with criticisms of excessively wasteful state bureaucracy and the evils of socialism have encouraged them to support economic measures designed to increase economic inequality of outcome as a means of increasing financial incentives to hard work in order to secure higher rates of economic growth.

Insofar as Mrs Thatcher and her supporters have accepted this set of beliefs they have been described as neo-liberals rather than conservatives. However it has been argued also that Mrs Thatcher’s version of New Right ideology has involved a combination of neo-liberal and neo-Conservative ideology in that as well as accepting the importance of the market mechanism she and her supporters have believed that a strong state would be necessary to re-establish law and order, to maintain law and order in the face of significant industrial disputes such as the miners’ strike of 1984 -85, to increase expenditure on defence in order to counter the perceived USSR threat and strengthen the role of central government in the provision of state education which was believed to be failing to meet the needs of the capitalist economy. Consequently Andrew Gamble has argued, very importantly that Mrs Thatcher’s beliefs may be summarised as involving a belief in the free economy and the strong state.

It is  generally argued that Conservative governments under Mrs Thatcher distanced themselves from Keynesian methods and based their economic theories much more on monetarist policies embodied in the so-called Medium Term Financial Strategy which involved 4 yearly targets for government spending, government borrowing [as measured by the PSBR i.e. the public sector borrowing requirement], and the money supply although even by the early 1980s it was being suggested the Conservatives were actually adopting a more pragmatic approach to economic policy and adhering less strictly to the dictates of monetarist theory.

Whatever the complexities of the economic debate it is the case that unemployment did rise very sharply under the Conservatives at the beginning of the 1980s. Mrs Thatcher and her supporters claimed that this was a price worth paying to reduce the rate of inflation  and increase the international competitiveness of the UK economy .The rate of inflation , after rising in 1979-1980 did fall as unemployment remained high into the late 1980s.There then followed a period of severe economic instability between 1988 and 1992 as unemployment first fell with a consequent rise in inflation followed by a rise in unemployment with a consequent fall in inflation. Following the exit of the UK from the ERM in 1992 we have had relative economic stability under both Conservative and Labour governments with steady economic growth , falling inflation and falling unemployment.  Supporters of Thatcherism argue that, in the final analysis, her economic policies were necessary to create the conditions for future economic stability and growth , a conclusion which is rejected by her critics. [Unfortunately I cannot pursue these controversies any further at this point.]

Mrs Thatcher and her supporters believed correctly that between 1945 and 1979  the taxation and social security system , taken as a whole, had been an instrument of redistribution from the rich to the poor but the effects had been to weaken economic incentives for the rich and the comfortably off  which ultimately resulted in reduced living standards for the poor. Egalitarian taxation and social security policies resulted in increased equality via a leveling down of incomes whereas what was required were policies which might increase inequality but would also increase economic growth and enable some of the financial benefits of economic growth to "trickle down" to the poor. Consequently in the Thatcher years [1979-90 ] there were gradual reductions in the standard rate of income taxation [from 35p to 30p] and even greater reductions in the highest rate of income taxation [from 83p to 40p] while rates if VAT [a regressive tax] were increased in order to offset  the effects of the reduction in income taxation.

Furthermore the Social Security system had also been abused by many welfare recipients who were claiming benefits to which they were not actually entitled and the system was helping to create a dependency culture in which welfare recipients  came to depend more on State "hand outs " than on their own initiative which according especially to Charles Murray, was leading to the development of an increasingly unemployable underclass of welfare dependants .Therefore according to the Thatcherites, rates of unemployment benefits should be reduced in order to force the work-shy back into work.

Within capitalist economies there are in any case tendencies for the wages of skilled workers to increase faster than those of unskilled workers and these trends combined with Mrs Thatcher’s taxation and social security policies and the growth of unemployment  to generate very significant increases in inequality of outcome and in relative poverty. Many analysts argue also that increases in income inequality actually undermine prospects of equality of opportunity and meritocracy

Nevertheless the Thatcherites argued that increases in income inequality would increase economic incentives to work, save and invest which would stimulate economic growth and indirectly improve the incomes of the poorest via "trickle down economics and that those who emphasised the usefulness of the concept of relative poverty were basically misguided egalitarians and that the concept of absolute poverty was a more meaningful concept. Mrs Thatcher claimed, furthermore, that there was no reason why such increases in income inequality should result in reduced equality of opportunity in which she remained a firm believer. In her view the quasi- marketisation of the education system would serve to increase its overall efficiency and hence improve educational the prospects for disadvantaged pupils but this approach to education policy has not been without its critics.

Thatcherite economic and social policies came under severe criticism from by politicians associated with the One Nation tradition  within the Conservative Party [ although as we shall see there are ongoing disputes as to the exact nature of One Nation Conservatism] . Thus ,for example, Sir Ian Gilmour argued that Keynesian methods of economic management were superior to the Monetarist theories supported by the Thatcherites and that these misguided monetarist  economic policies had unleashed an entirely avoidable economic recession leading to the rise in unemployment of more than 3million. Mass unemployment had resulted in the growth of mass poverty and Mrs Thatcher was unjustified in blaming poverty on the fecklessness of the poor [ as per Charles Murray's theories of the underclass ] when  when in reality  the main cause of unemployment was the lack of available jobs caused by Mrs Thatcher's own economic policies. Also although Sir Ian Gilmour emphasised  that Conservatives " had never supported equality " the degree of inequality generated partly by Mrs Thatcher's income tax reductions which disproportionately benefited the rich were a a main contributor to increased economic inequality. Nevertheless despite these powerful criticisms of Thatcherism Sir Ian Gilmour did agree in principle with the Thatcherites' programme of privatisation and with industrial relations policies designed to reduce the powers of the trade unions. Furthermore he believed that it was entirely necessary for the Miner's Strike of 1984-5  to be defeated. More recently Ken Clarke who is widely regarded as a One Nation Conservative has also stated that he agreed with much of Margaret Thatcher's economic policies.

John Gray  [Is Conservatism Dead? John Gray and David Willetts1997]  provided another powerful critique of the neoliberal policies which he believed were practised by both the Thatcher and Major administrations between 1979 and 1997.Is Conservatism Dead is divided into two sections in which Gray and Willetts debate whether neoliberalism is inconsistent [Gray] or consistent [Willetts]  with the continued existence of flourishing communities. I am unable to do justice to the complexity of both author's arguments but in simplified summary form Gray's arguments may be outlined as follows. [This part of the document may be useful if you are writing essay on Conservatism and  Community]

The expansion of neoliberalism is therefore incompatible with the traditional conservative support for viable communities. Neo liberal policies generate rapid and unpredictable social changes which undermine  communities and in its doctrinaire support for limited government it turns its back on conservative pragmatism and scepticism. John Gray certainly certainly does not call for a reassertion of traditional family values and moral standards. These would fail to take account of  much increased diversity of contemporary advanced capitalist societies. Conservatism is dead, according to John Gray, because the modern Conservative Party [as of 1997] has no strategy for reconciling economic policies with the strengthening of communities.

[ In the next section of the book David Willetts argues that it is possible to envisage a "Civic Conservatism" which can combine neoliberalism and communitarianism  and Willetts' ideas have to some extent fed into David Cameron's development of the "Big Society " strategy which is discussed later in this document where it is argued that the strategy did not prove to be especially effective.]

If we refer once again to the basic idea that as One Nation Conservatism involves achieving a balance between necessary intervention by government to bring about social and economic reform and policies to safeguard the effective  operation of capitalist private enterprise  it seems fair to say that under the leadership of Mrs Thatcher the Conservatives departed from overall One Nation principles in the sense that although they sought to increase the overall dynamism of the private sector the potential benefits of economic growth did not trickle down significantly to the more disadvantaged sections of the population. Instead there were significant increases in economic inequality and relative poverty  which might well reduce prospects for social mobility and equality of opportunity. The urban riots of the early 1980s pointed to the alienation of inner city youth while the social theorist John Gray who had initially been a strong supporter of Thatcherism now argued that Thatcherite policies had resulted in a serious decline of any sense of community which again pointed to a disjunction between Thatcherism and One Nation Conservatism.

The following diagrams illustrate the rapid growth of income inequality [measured by Gini Coefficient trends]  and Poverty in the era of Thatcherism but also that subsequent Conservative and Labour Governments were unable to reverse the growth of income inequality . Thus on the basis of these data it would appear that Income inequality and poverty [although they did not increase as in the Thatcher era ] also did not fall either which calls into question whether, in terms of policy outcomes John Major could be said to have led  a One Nation Conservative Government [ See below for further details]  Also the record of Labour Governments between 1997  and 2008/9 left much to be desired. 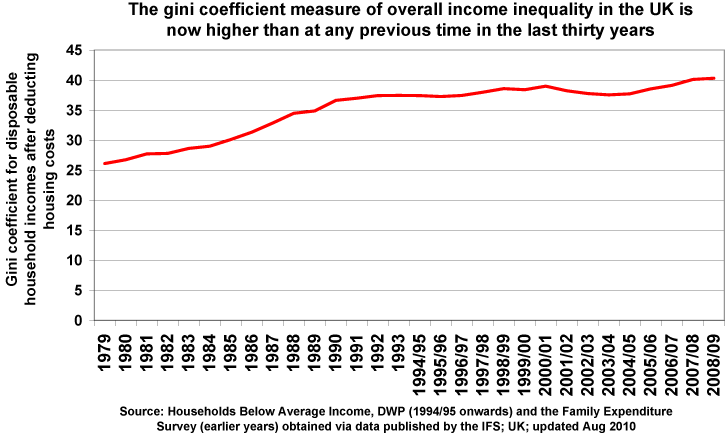 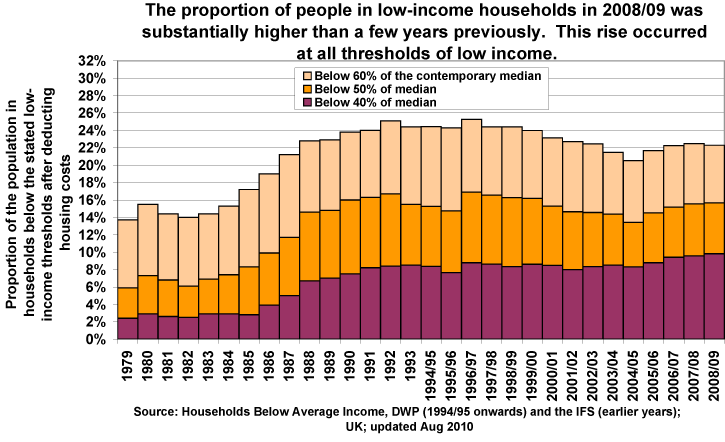