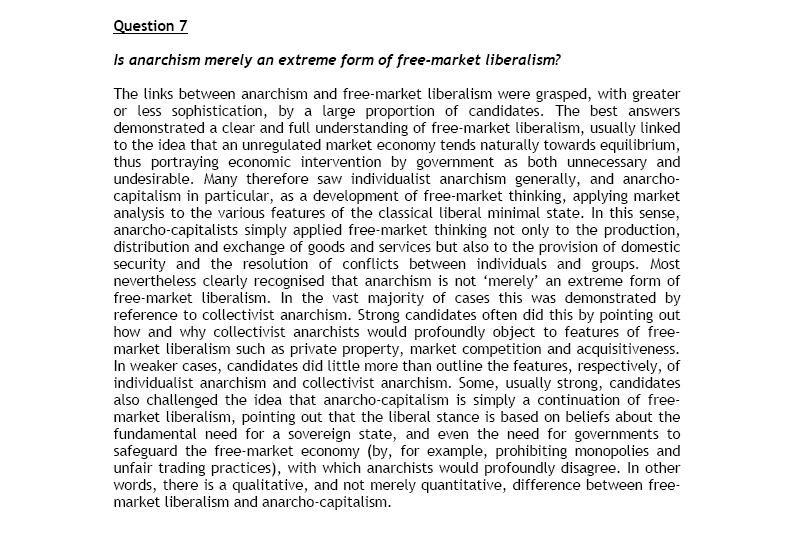 Is Anarchism merely an extreme version of free market liberalism?

Anarchism is a fairly broad ideology and there are important divisions within anarchism as between individualist and social anarchism and also within these categories and it can be shown that whereas most individualist anarchists and in particular anarcho-capitalists have some sympathy with the principles of free market liberalism this would not apply to social anarchists in general and particularly not to anarcho-communists such as Peter Kropotkin.

Free market liberal principles have been espoused by both classical liberals and by New Right theorists who have combined support for free market liberalism with support for the strong state. Free market liberals argue that individuals are rational and therefore the best judges of their own interests and that overall economic efficiency can best be achieved by unregulated laissez faire. Liberal support for laissez faire was under-pinned by the economic theories outlined by Adam Smith in his study “The Wealth of Nations”[1776] in which he argued that the competitive capitalist economy based upon private profit and individual self-interest could via the so-called “invisible hand” of the market mechanism secure the best possible living standards for all members of society.

[Essentially the theory suggested that if large numbers of firms were in competition with each other they would try to keep their prices as low as was consistent with  a reasonable level of profit for fear that if they increased prices they would lose sales to their competitors. Furthermore in the competition between firms, efficient firms which could produce most cheaply would be able to expand at the expense of higher cost firms who would be driven out of business. Consequently the economic competition between firms would mean that consumers can buy from the most efficient firms charging reasonable prices and all of this can be achieved without government intervention in the economy i.e. via laissez-faire.]

Free market liberals believe also that limited governments are necessary to guarantee social order and to provide a legal framework within which private enterprise cam work efficiently but the scope of government should be restricted  so that it neither infringes upon the [negatively defined] freedom of the individual nor inhibits the freedom of the market economy via excessive regulation . Free market liberals, although not originally supporters of universal suffrage have come to accept the overall political framework of modern liberal democracy.

They recognise that the unregulated free market is likely to generate considerable economic inequalities but see these inequalities as inevitable [since they derive from individual, natural differences in talents and abilities] and desirable [because they provide the incentives necessary to promote economic growth and rising living standards for all. They do however support equality of opportunity as necessary for economic efficiency but tend to reject egalitarian arguments that high levels of economic inequality restrict individual liberty [positively defined] and the prospects for equality of opportunity

Warren and Tucker both feared that communal living could result in the denial of individual freedom and both also supported the ownership of a limited amount of property as a means of protecting individual independence while Tucker believed also in the value of economic competition and some economic inequality which would generate incentives and allow individuals to enjoy the benefits of their own hard work. Anarchism was “consistent Manchesterism,” he said which pointed to his support for a modified form of laissez faire which could result in some economic inequality. However Warren and Tucker also wish to organise economic systems in which profit and the exploitation of labour would be abolished and good and services would be exchanged on the basis of their costs of production [primarily their labour costs].

In the schemes of Warren and Tucker the abolition of the state would inevitably mean that the scope of “free market liberalism” would increase because goods and services such as legal institutions, the police and armed forces which had been previously provided by the limited state would now be provided via the market mechanism which would now be free of all government regulation. However the abolition of the profit motive and the resultant overall reduction in economic inequality [despite the work incentives which Warren and Tucker wished to retain] could be seen as a retreat from the principles of market liberalism rather than an extreme version of them.

It might be argued that supporters of anarcho-capitalism such as Murray Rothbard and David Friedman are the anarchists which are closest to supporting an extreme version of free market liberalism. Thus whereas  classical liberals traditionally argued in support of laissez faire combined with a limited state which was necessary to provide courts, police and prisons to promote internal order and to provide armies for defence against aggressors  and neo-liberals  argue for the extension of free market liberal principles  to areas such as the provision of health, housing , education, and social security, anarcho-capitalists argue for the total abolition of the state and for the provision of all goods and services  including even legal services, the police, and the armed forces via the market mechanism in which  the profit motive would be retained and economic inequality would continue since anarcho-capitalists defend its importance as an incentive to encourage work, saving and investment.

According to anarcho-capitalists all government services are organised inefficiently mainly in the interests of the producers rather than the consumers of these services. Thus it is argued that professionals working in theses state services are reasonably well paid but that they do not necessarily provide a good service for their clients because they know that their clients have “nowhere else to go.” In a more competitive privately organised system services would be far better the anarcho-capitalists claim and so all would gain if the state were abolished in its entirety.

In summary anarcho-capitalists are therefore strong supporters of the abolition of the state and of the extension of private enterprise based upon the profit motive, atomistic sef-interest and economic inequality and it can be argued that it is this variant of anarchist theorising which comes closest to the acceptance of an extreme version of free market liberalism although it could also be argued that in its support for the actual abolition of the state it also departs from an important element of free market liberal ideology in which the state does have an important role to play.[We may note also that anarcho-capitalism is subject to the entire range of socialist criticisms of capitalism so that many socialist-supporting anarchists actually deny that anarcho-capitalism is a form of anarchism at all…  a view which anarcho-capitalists would themselves reject.] .

Social liberals argue that the free market economy results in a sub-optimum allocation of resources because it is based upon production for profit rather than production for need and that that it inevitably results in economic inequality, poverty and dehumanising work which inevitably restricts the liberties and opportunities of the poor to develop their talents since the poor are denied opportunities which are available to the rich as a result of their wealth .Therefore  the economic inequalities which according to free market liberals derive from mainly inherited differences in talent derive according to social anarchists from the intergenerational transmission of social class advantages .Furthermore  any aspects of  liberty which do exist under capitalism are atomistic, self– interested forms of liberty in which individuals use their liberties to promote their own self –interest at the expense of others.

Whereas market liberals support the limited liberal democratic state social anarchists oppose all forms of state including the liberal democratic state arguing that it uses its powers to pass laws, raise taxes and fight wars which destroy individual liberty; that it ultimately favours its own interests and the interests of the rich at the expense of the poor and that   its very existence denies individuals to promote a harmonious social order via their own activities.

Instead of free market principles and the limited liberal democratic state both Bakunin and Kropotkin propose communal living involving the abolition of private property and its replacement by the communal ownership of the means of production leading to much greater economic equality which in their views will also enhance both individual liberty and equality of opportunity. It is hoped that in this situation individuals will come to equate their own self- interests with the interests of their community as a whole. Also, whereas Bakunin , in his collectivist belief that at least in the short term goods and services should be allocated according to work done, has not totally rejected free market liberal support for financial incentives, Kropotkin , as an anarcho-communist, hopes that individuals will quickly be prepared to work for the good of the community so that goods and services can be allocated according to social need  which amounts to a total rejection of the economic principles of free market liberalism. We may note also that William Godwin although he is often described as an individualist anarchist also supported communal, living, communal ownership of the means of production, allocation of goods and services according to need and high levels of economic equality all of which distance him very considerably from the principles of free market liberalism.

[Also we could buid in the following information Proudhon .How?

Proudhon argued in support of a system of “Mutualism” which Heywood describes as “a cooperative productive system geared toward need rather than profit and organised within self-governing communities” and in Political Ideology Today [2002]  Ian Adams  states that “Proudhon’s ideal world was a world of small independent producers- peasant farmers and craftsmen who associated and made contracts with each other freely for their mutual benefit and for whom a centralised coercive state was an unnecessary evil. We can certainly see elements of socialism in Proudhon’s rejection of large inequalities of wealth and income and of the profit motive but in his rejection of the central state and his support for self-governing communities, individual ownership of possessions and acceptance of a measure of economic inequality we can also see important links to liberal ideology.” It may be argued that his comments apply equally to the ideas of Warren and Tucker.