Is the UK becoming a classless society?

This document is divided into 6 Parts:

3. Marx, Weber and the Functionalists : An Introduction

5. Neo- Marxism and the Rejection of Post-Capitalist Theories

13. Appendix : Some Recent Analysis of Social Class and Voting Behaviour

With grateful thanks to P and J for helping me to revise this!

It has periodically been argued in the last 50-60 years that capitalist societies such as the UK were increasingly becoming classless societies and that class was in fact "dead". This view is associated, for example, with the so-called post-capitalist theorists of the 1950s and 1960s; with analysts who saw the apparent decline of class voting from the 1950s onwards as evidence of a declining class consciousness which was interpreted by some as evidence of the declining significance of social class itself; with theorists of late modernity such as Ulrich Beck; and with theorists of postmodernity such as Jan Pakulski and Malcolm Waters.

However, against the classlessness thesis it is pointed out that there is abundant evidence that the UK remains a very economically unequal society, that prospects for upward social mobility are limited, and that there are significant class inequalities in educational achievement, in health, and indeed in mortality rates. From both Neo-Marxist and Neo-Weberian perspectives, it is argued that social class differences are very much alive in the UK, while even Functionalist theories can be used to suggest that various forms of social inequality exist, but that these are in fact inevitable and desirable. Opposition to the classlessness thesis can be found also in the work of Mike Savage and his associates, in the work of Guy Standing on the Precariat, and in a recent British Social Attitudes survey on perceptions of the UK class structure.

In this document, I shall first illustrate the extent of UK inequalities in wealth, income and opportunities for social mobility, and then describe competing sociological approaches to the analysis of the UK class structure.

The document can stand alone, but I have also included links to other documents on my site; there are also broken links to future documents yet to be written on Weber and Social Stratification, the Working Class and the Underclass, which I hope to complete by September 2020!!

As a result of the effect of taxation and benefits, final incomes [Incomes after the payment of taxes and the receipt of welfare benefits]  are more equally distributed than original incomes. Direct taxes are mildly progressive, but indirect taxes may be regarded as regressive if assessed as proportions of income received, or broadly neutral if assessed as proportions of consumer expenditure. It is the effects of welfare benefits rather than the effects of taxation which cause final incomes to be more equally distributed than original incomes

There is evidence of increased income equality in the UK between the 1940s and the 1970s, but this trend was reversed significantly in the Thatcherite era. There has been little change in the distribution of income since the 1990s. Coalition and Conservative politicians tend to point out that the distribution of income is now more equal than in 2010 when Labour left power, but this increase in income equality is very small and certainly has not offset the large in increase in income come inequality which occurred during the Thatcher era.

Click here for BBC coverage of IFS work on inequality.

Click here for a Parliament Research Briefing on Income Inequality in the UK which also provides information on the degrre of income equality /inequality measured in terms of percentile ratios and income shares (see pp12-17}.

Click here and here for very detailed annual data from the IFS on Living Standards, Poverty and Inequality.

Click here for Inequalities in the 21st Century: Introducing The IFS Deaton Review.

Click here for a range of detailed articles on the distribution of income from The Resolution Foundation, and here for an article and here for a PowerPoint presentation and video discussion on how the inclusion of capital gains in the definition of income affects measurement of trends in income inequality. 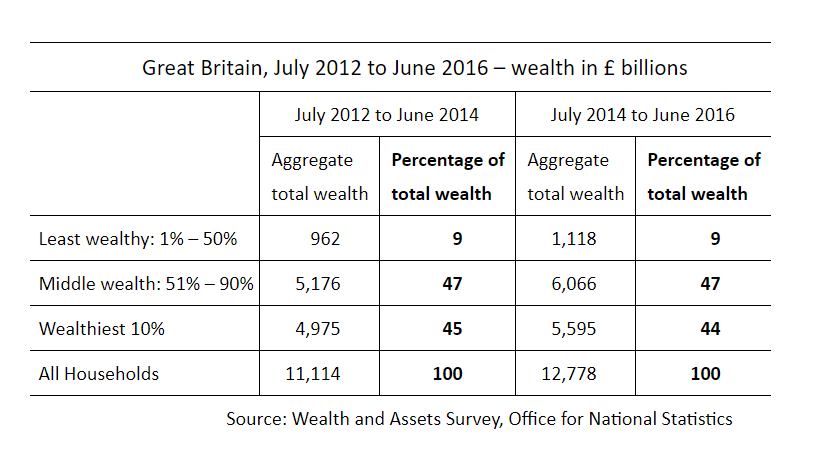 Click here for Thinking Allowed with Laurie Taylor on The Super Rich.

Click here for The Guardian page on The Super Rich

Click here for a BBC item on Millionaire households in Britain.

On the international dimensions of the Super Rich

It is important to note that many of the most wealthy individuals living in the UK are foreign nationals, and that many most wealthy UK citizens may actually live abroad. Thus, in so far as a UK upper class exists, its members may well have international business interests and be able to increase their overall wealth by relocating their investments around the world, for example in order to take advantage of more favourable tax regimes. Prior to the 2019 UK General Election, it was claimed, for example, that if a Labour government led by Jeremy Corbyn should come to power, there would be a flight of capital from the UK as individuals aimed to avoid the higher rates of taxation which a Corbyn government would introduce. While staunch defenders of capitalism would argue that punitive taxation of the wealthy would reduce rates of economic growth and hence reduce living standards for the UK population as a whole, supporters of higher taxation of the wealthy argue that some of the economic activities of the wealthy inhibit prosperity for the average citizen. In the event, of course Labour were defeated in the 2019 General Election, and Jeremy Corbyn has been replaced as Labour Party Leader by Sir Keir Starmer. We await future Labour Party policy development with interest.

Click here and here for information and opinions on capital flight.

Official Data on Poverty are presented by the Department of Work and Pensions. Poverty is measured in absolute and relative terms before and after housing costs. You can find here the 2018 Summary DWP publication which contains data for 2017/18. These data indicate that absolute poverty (both before and after housing costs) has declined in recent years, and in November 2018 government spokespersons focused on these data to argue that the recent report by UN Special Rapporteur on Extreme Poverty Professor Philip Alston is flawed. Click here for Guardian coverage of subsequent developments, and here for the latest UN response.

Click here for Sutton Trust Report: Are the Elites pulling away?

Click here for LSE Blog post,  here for the LSE event and here for BBC coverage of above report.

Click here for a Guardian article on Social Mobility by Lee Eliot Majors and Stephen Machin. These authors have also written Social Mobility and Its Enemies (Pelican), in which they argue that, for a variety of reasons, recent educational policies have been relatively ineffective in promoting social mobility.

Click here for a podcast discussion with Professors Stephen Machin and Lee Eliot Majors (Authors of Social Mobility and its Enemies).

With regard to the overall analysis of social mobility we may distinguish between differing sociological perspectives.

The distinction between absolute and relative social mobility can hopefully be clarified via the following numerical example.

Absolute Social Mobility is measured as a percentage of the whole population , which in my example is 250.

Relative Social Mobility is measured by means of an Odds Ratio.

In my example, for Class 1 this is 80/20 divided by 30/120 = 16. Thus, the relative mobility prospects of Class 1 origin respondents are far superior to those of Class 7 respondents.

Imagine instead that the odds ratio was 80/20 divided by 80/20 = 1. In this case, the relative mobility prospects of Class 1 and Class 7 respondents would be identical and on this measure we should have perfect equality of opportunity.

In practice, however  the measurement of socila mobility is more comlex. Current studies of social mobility in the UK are usually conducted using the 7 Class NS SEC Scheme which would actually generate 441 potential odds ratios and render the overall measurement of social mobility trends very complex. [Thus for example one could calculate the the Odds ratio for the relative chances that members of original classes  3 and 4 might reach destination classes 5 and 6 or that members of original clases 1 and 2 might reach destination classes 3 and4 and 439 similar possibilities!!]

John Goldthorpe and his associates used this approach  to the measurement of social Mobility in the so-called Oxford Social Mobility Study and recent trends in social mobility are analysed in detail in Social Mobility and Education in Britain[2019] by Erzsebet Bukodi  and John H. Goldthorpe . I cannot summarise their detailed arguments here but in broad terms  they draw the following main conclusions.

These points are elucidated further in the following articles

It can also be noted that the children of the higher sections of the dominant economic class are especially likely to attend public schools and/or Oxbridge and other prestigious Russell universities and then to enter elite occupations in politics, law, industry and the military. Within this grouping have also developed kinship and friendship networks and shared social activities leading to intermarriage which contribute further to social cohesion and intergenerational stability. Wealthy parents  also can use various methods to ensure that their children benefit more than poorer child from the operation of state education which increases the chances that state educated children of affluent parents can access elite occupation while educational success and  entry to elite positions is far less likely for poorer children.

Click here for Guardian article on Social Mobility by Lee Eliot Majors and Stephen  Machin. These authors have also written Social Mobility and Its Enemies [Pelican] in which they argue that for a variety of reasons recent educational policies have been relatively ineffective in promoting social mobility.

Sociologists have increasingly discussed these differing aspects of social class via the so-called Structure, Consciousness and Action (SCA) approach to class analysis, which focuses on the extent to which class structures might or might not affect class consciousness and class action. In Bourdieusian approaches to class theory, social classes are defined not only by their possession of economic capital but also by their possession of cultural and social capital, and the combined effects of the possession or non-possession of these three types of capital are seen as inhibiting radical change in capitalist class structures. Thus it is highly likely that parents with high levels of economic, cultural and social capital will be able use these different types of capital to maintain the future class position of their children.

It is important also to consider the political dimensions of social class, and in particular to assess whether, insofar as a dominant economic class exists, it may also wield considerable political power. Some information on the analysis of power and authority can be found here.

I shall now provide summaries of the differing perspectives on the UK class structure. Marxist, Weberian, Functionalist, New Right, Post-Capitalist, Post-Fordist, Late Modern and Post-Modern analyses of social class will be considered, as will the findings of the recent Great British Class Survey which derive from a Bourdieusian approach to class theory. However, I shall provide only brief summaries of these differing analyses here, combined with links to more detailed information elsewhere on this site.